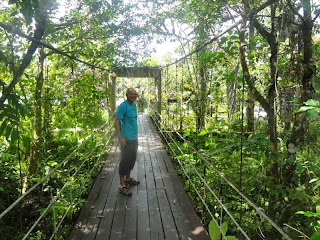 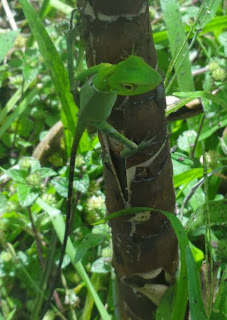 Almost didn't catch the 9.20am flight from Miri to Mulu. We were at the airport in plenty of time and were sitting near the departure gate. I thought the plane must have been delayed as we didn't hear an announcement, then when we did hear it no one else moved from their seats so we didn't rush.
We dawdled over, then walked down some steps and there was our little aeroplane with propellers. We took a quick photo, stepped on board, the cabin crew immediately shut the doors and along with about 15 other people, we were off on the 25 minute journey to Gunung Mulu National Park.
It is completely in the middle of a vast Rainforest and to get to the Park Headquarters you have to cross a bouncy rope bridge over a river.
Settling in to our longhouse room and just been on a nature trek through the forest.
Got a batcave to visit this afternoon - it's non stop today!