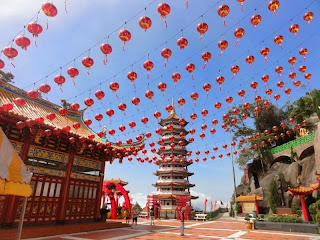 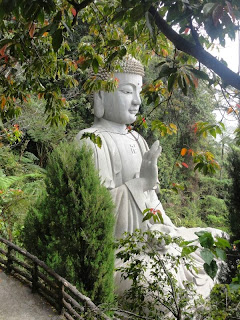 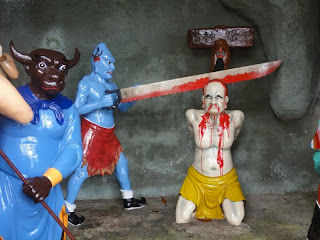 The Genting Highlands are still completely covered in cloud so we are still not able to see anything outside.
Fortunately, there is a shuttle bus to Chin Swee Caves Temple which is part way down the mountain. When we arrived it was right on the edge of the clouds, sometimes it was sunny, sometimes the clouds came across and hid the top of the pagoda.
It is a very interesting place and is tucked in amongst the jungle on the sides of the steep slope.
We walked around it in the wrong direction and followed a little path past some very graphic sculptures. It showed scenes from the ten chambers of hell and we saw number ten first, working backwards to number one. They all had names, eg, number six was the Great Howling Hell, and all sorts of gruesome acts were shown in detail.
When we got to the end we found the entrance and it was called 'The path to Enlightenment'.
Maybe it would have made more sense if we had gone in the right direction, but one thing is clear - make sure that you behave well or face the consequences.