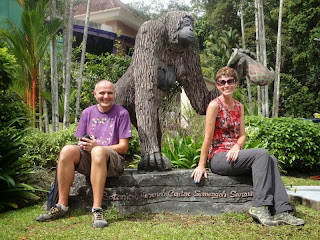 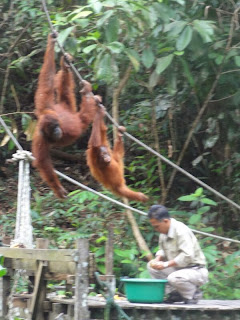 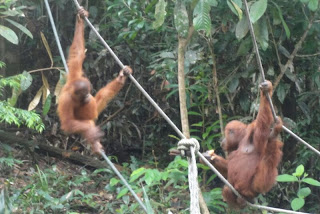 Caught an early bus to Semenggoh nature reserve as it is home to 27 orangutans, and breakfast is served at 9am.
For over 20 years the reserve was home to a rehabilitation centre where orphaned or young orangutans who had been rescued from captivity, were taught how to survive in the wild.
The programme has now been transferred to another centre but Semenggoh is still home to its graduates - semi wild orangutans and their babies.
It is fruiting time in the forest at the moment and the orangutans have lots of wild food to eat, so we were warned that non might turn up at feeding time.
We were lucky though and Seduku, a 43 year old female turned up with her six year old son. She has two other children, is already also a grandma and is known as the grand old lady of the park.
She came down to the platform more often than her son and at one stage she took two enormous bunches of bananas - one in her mouth and one in a foot - and carried one up the rope to him.
They both came down later and were given a coconut each that they carried high up into the trees. Seduku hit hers really hard against the tree trunk to crack it open and the young one went to do the same, but dropped it.
Instead of picking it up, he went over to his mum and I am sure ended up eating most of hers.