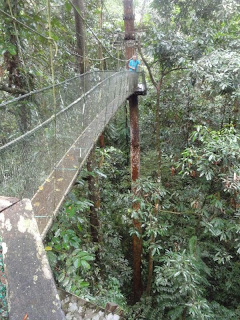 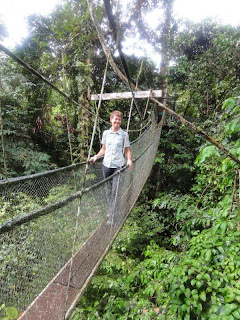 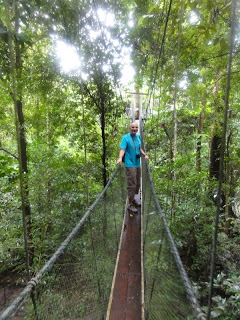 At 480 metres long, it is the longest tree based walkway in the world. The platforms stretch between 16 enormous trees and you walk amongst the canopy between 10 and 30 metres above the ground, at the bargain price of £8 each.
There were six of us including our guide in our group, and only two people were allowed on each section at a time.
It was my misfortune to be teamed up with Daz as he is never scared by heights. It was actually quite nice to walk along on my own, then he would jump on and shout that he was going to chase me. The whole walkway bounced up and down, then he stopped and started saying his knees were shaking and the skywalk shook dangerously. Not funny the first time and it didn't get any less frightening after half a dozen times!
As you might guess with all the messing around, we didn't see any birds or animals, but it was a great adrenaline rush.
Ps, he also knows I am frightened of dogs so every now and again he makes growling sounds, and last night when it was very dark in our room he started making ghost noises.