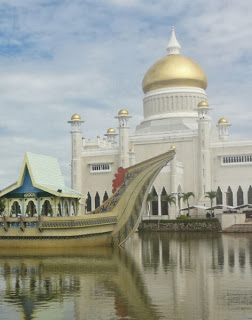 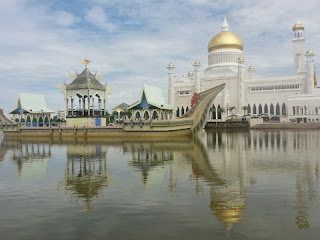 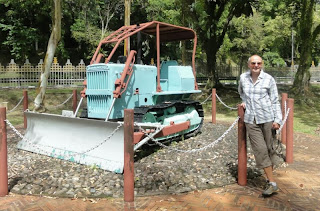 We walked around the outside of this Mosque in Central BSB. It is a large Mosque with a golden dome which is surrounded by a lagoon, and 'floating' on the lagoon is a barge. However, it appears to be made of mosaic so is not a real boat.
Today is Friday and the Mosque is closed to non Muslims, so we have not been inside.
Continuing with the 'not going inside' theme we walked a few k to the Istana Nurul Iman, which is the royal palace. It has 1,788 rooms and is three times the size of Buckingham Palace.
Unfortunately, we went on one of the 362 days of the year when it is not open to the public. We did know this in advance, but we expected to get a good view of it from the main road. Big mistake - we could only see the gates, a couple of soldiers and a distant gold dome.
Undaunted, we walked on hoping that we would see it from another angle - still no.
We did find a completely deserted park that had a few beautifully painted tractors and diggers amongst the flower beds. No idea why.