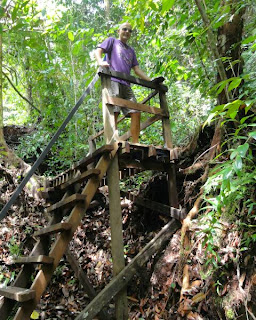 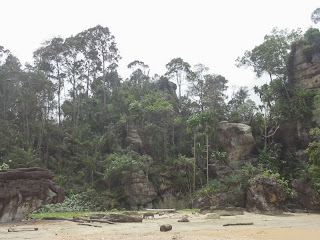 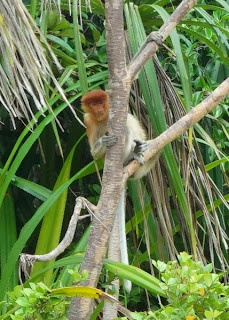 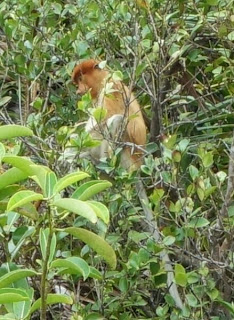 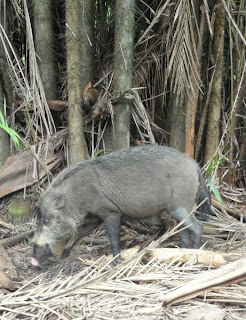 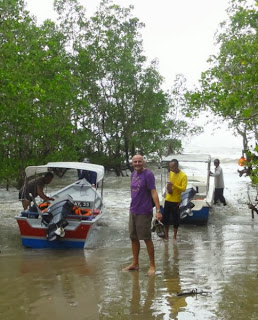 Caught a bus this morning to Bako National Park. Whilst waiting at the bus stop we met a lovely couple, Mr and Mrs Du Lac from Spain/Greece and we stayed together for the whole day.
Once we arrived at the Park entrance we had to take a boat for the next step. Unfortunately, the tide was out so we had to wait at least an hour before we could set off.  Once aboard we shot along at high speed until we came to a sudden stop. The water was too shallow so the captain had to punt us along the coast until we landed at a beach and then splashed ashore.
The captain explained that as the tide was coming in and the sea would get very rough, then we could only stay for three hours.
There was a little settlement by the beach and we picked up a map. We trekked along a tiny path - up and down rickety ladders, and over huge roots and rocks - until we got to a deserted beach. Well, deserted apart from a bearded pig wandering around, and two proboscis monkeys in the trees.
On the path back we walked right past another pig and I was mindful of the signs saying 'beware of wild animal attacks'.
We then had to find our way over another jungly hill and through a mangrove forest to a tiny gap in the trees where our little boat was waiting.
The journey home was dramatic as the waves were about two metres high. Our driver had a clever technique and surfed us home on the back of the waves. along the coast.
It was really exciting, but I was pleased to be wearing a life jacket.