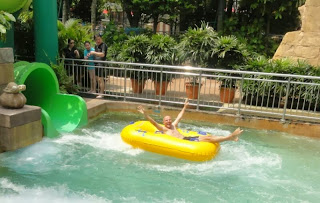 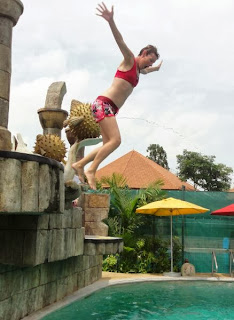 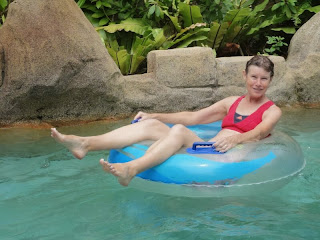 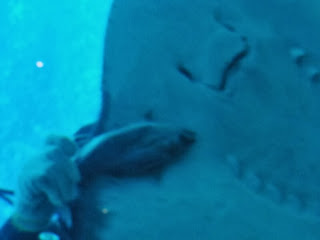 We really pushed the boat out on our last day in Singapore and did a double header - the Waterpark and Aquarium.
I have never been to a Waterpark before and did not know what to expect. We arrived just as it opened and raced to the first ride.
We got straight on and both sat in the yellow dingy that Daz is modelling. It trundled slowly up a slope - apparently the underside is magnetised. Once at the top we shot down a pitch black tube and then it turned into a roller coaster, as we whizzed up steep slopes and careered down the other side. I screamed all the way, then suddenly we went through a tube again and out into the splash pool at the bottom.
It was so amazing we did it again and then tried all of the other rides at least once. There was also a lazy river to float around on rubber rings, and an adventure area. We jumped off the wall, tight rope walked across the water (I fell in both times) and tried to climb a rope to ring a bell (I didn't manage it).
There was also a massive tank where you snorkelled amongst thousands of beautiful fish.
After the mornings excitement we spent the afternoon in the biggest Aquarium in the world.
The displays were incredible and we eventually sat down for a rest in front of the Ocean Gallery.
We watched gigantic manta rays and thousands of fish swimming about. A couple of divers appeared and suddenly it was feeding time. One diver swam with a ray and fed a fish to him right in front of my nose.