Sky diving in a wind tunnel 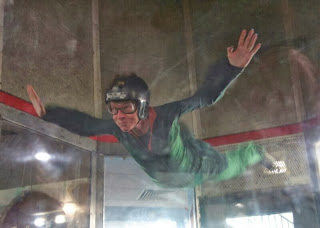 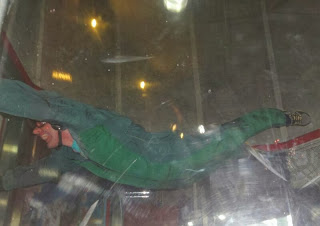 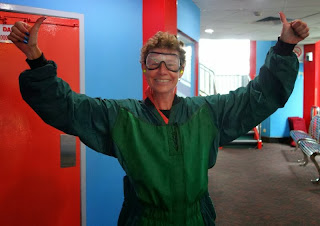 We are still inside today, this time in the indoor theme park that is attached to our hotel.
They have a sky diving wind tunnel and for £7 each we got the chance to 'fly' for two minutes.
I went first and was in a group of two with a Chinese guy. We got a five minute lesson from the instructor on what position to adopt and then the instructor stepped into the tunnel.
I stood at the door, made a star shape and fell forward. I immediately floated straight up in to the air and it was incredible. The tiniest movement made me either rise higher or drop lower, or forwards or backwards and I kept trying to follow the instructors orders.
After a while he caught hold of me and helped me out through the door and I was relieved and elated, as I had enjoyed it but it was pretty scary and I thought it was over.
My mistake, as I watched as the instructor motioned to the other person in my group. I watched in terror as he grabbed hold of his wrist and ankle and they started spinning rapidly, and then shooting to the top of the tunnel and then back almost to the ground before racing up again.
All too soon it was my turn. I thought maybe he wouldn't do that with me, but no, we did the same thing!
It was amazing, but two minutes was absolutely plenty and when Daz asked if I wanted another go when it was his turn I quickly declined.