'Venice of the East' 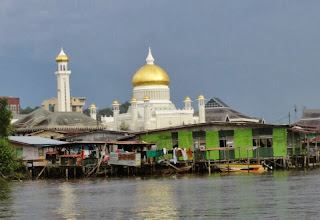 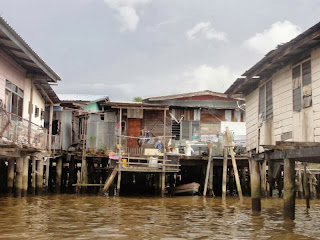 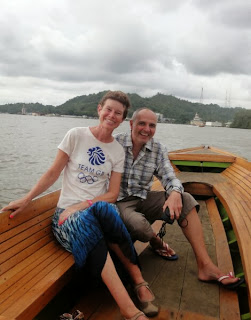 Last night we stayed on Labuan Island which is an interesting place - a duty free tax haven that is full of alcohol shops, chocolate shops and nightclubs. I haven't seen the inside of a nightclub since 1980's, so we didn't make full use of all the amenities.
This morning we caught a ferry for the hour long journey to Brunei. Brunei is a tiny oil rich country on the northern coast of Borneo where the sale of alcohol is banned.
After catching a bus to our hotel we had a wander around the capital, Bandar Seri Begawan, known as BSB.
There is a large water village in the centre of town where all of the residents live in houses on stilts. It is often referred to as 'Venice of the East', including on the map we picked up from our hotel.
We took a speedboat taxi for a look around that bore no resemblance to a gondola. Also there was nothing similar to St Marks Square, but I did get a good shot of some of the houses with the Sultan Omar Ali Saifuddien Mosque in the background.
I can't tell you about it yet though as we are going to try to visit it tomorrow.