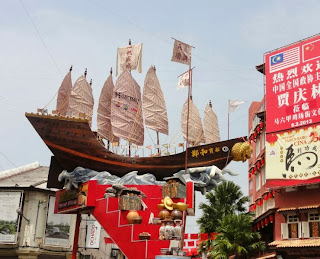 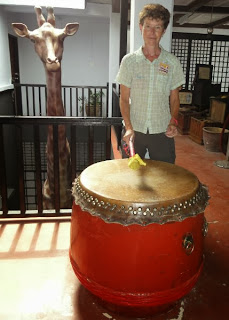 Today we made a pretty short journey - 130 kilometres from Melaka to Putrajaya. We caught three buses and one train, it was easy and pleasant and it cost a total of £3.50 each.
Yesterday we spent a couple of hours in the Zheng He museum in Melaka. He was a famous Chinese Admiral, explorer, diplomat and palace eunuch. He lived from 1371 to 1433 and made seven epic voyages.  Each one took about two years and he had an enormous fleet of ships, crewed by 28,000 men.
He used Melaka as a supply point and stopped for a while there on most of his voyages.
The museum was really interesting and was full of items that would have been found on his ships. On one of his voyages he brought back a giraffe from Africa to present to the Empower, as he thought that it looked like a mythical creature from Chinese legends.