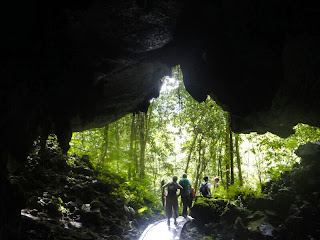 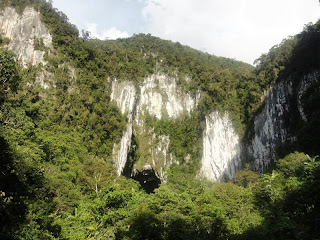 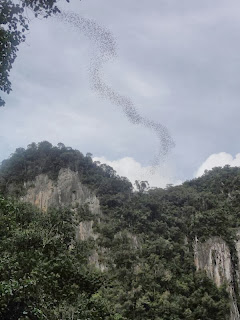 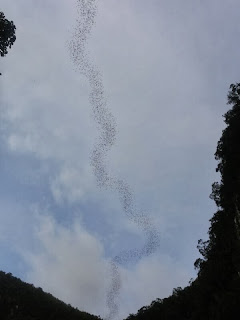 We walked along the wooden boardwalks through the jungle to see two of the famous Mulu caves, although I have to admit that a couple of weeks ago we had never heard of them.
First of all we went to Lang Cave which was beautiful - full of stalactites and stalagmites and bright white limestone that had been eroded by a stream for millions of years. No wildlife had settled in it and I really enjoyed the experience.
In contrast, Deer Cave is full of approximately three million bats, swallows, beetles and cockroaches.
It is enormous and very impressive, but there is an ominous background noise of fidgeting creatures and it absolutely stinks - nature's perfume, according to the guide.
We walked a long way around it and we could see huge black masses attached to the ceiling, which were the resting bats. I led the way out, and left the rest of the group behind as I sped along. I was very keen to get back into the daylight  and out of the cave for the next event.
We walked to a small clearing nearby, arriving at about 5pm and just before 5.30 the action started. The time varies and two days ago it started at 4.45, so you can understand my panic to be out of the way.
Up to three million bats stream out of the small cave entrance to feed on insects in the rainforest. They fly around in a whirling mass to try and avoid the predator birds that are waiting for them every evening.
At first there were groups of bats and gaps between them, but after a few minutes it was a constant stream that went right above our heads.
An unbelievable sight and a great privilege to see it.