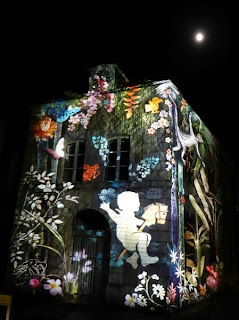 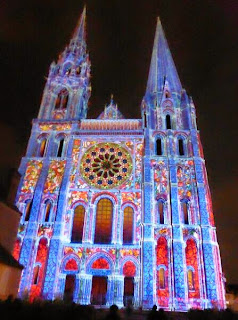 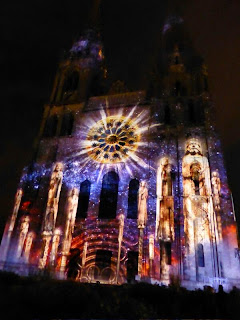 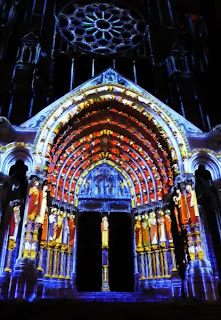 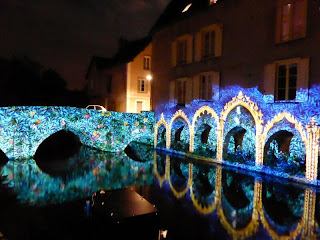 Last night we walked to Chartres to see the 'Lights of Chartres'. It was so incredible I was speechless - which is a complete rarity.
We got there late, will explain why later, and it was pitch black as we turned a corner to the Cathedral. At first very little was happening, but then, like a fire taking hold, more and more sections lit up. The details were so intricate that it looked as if the stone carvings were wearing brightly coloured clothes, but as soon as you started staring at one bit, it changed colour and shape.
Most amazing was the front of the Cathedral which changed colour and patterns constantly to music - at one stages it looked as if angels were building it, another time the stone pillars came to life, floating skywards. It was almost enough to make me turn religious.
There is a walk all around the town with 29 buildings illuminated. A lovely section was along the river where each of the bridges were different, one was an aquarium with giant fish swimming along the side of the bridge, and another was a beautiful grotto.
We saw the bridges, then I looked at my watch and realised that it was one minute to midnight, so we set off quickly home before we turned into pumpkins.
I have seen some amazing things on our travels, but this is up there at the top of the list - come and see it if you can, it is on every night until October.
Ps, why were we late getting there? Well actually we were so early that it wasn't even dark. We met a friendly French man who said that we should have a beer and listen to some live jazz first. Good idea we thought, so a few minutes later we were in a cave under a bar with all the locals, listening to some very creative, strangely beatless and almost never ending, jazz. Interesting saxophone and drum solos too!