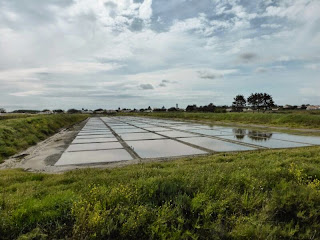 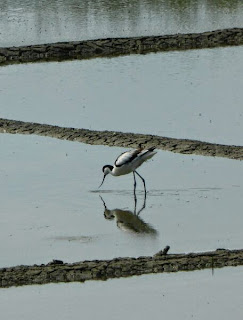 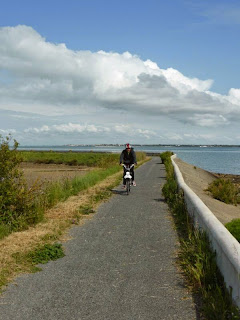 Wow, it's good to be back on a bike. We cycled 45 kilometres today and almost all of that was on smooth tarmaced cycle tracks. We saw hundreds of other cyclists and I bonjoured quite a few of them.
Our route took us around the flat reclaimed area close to the shore and I spent all afternoon assuming that we were looking at oyster beds. We saw lots of birds and in the style of Sherlock Holmes I made a deduction. Clue one was the oyster stall near our campsite, clue two was the fields filled with water, and three was the birds wading about, that I assumed were oyster catchers.
All of the clues fitted together and I was happy with my theory.
However, when I got back and checked the Internet, (just to be on the safe side as I try not to write too much rubbish), it appears that the fields were salt pans, and the long legged birds were avocets.
Ps, in my defence I think that a lot area was used for oysters, but the pictures that I took were not.