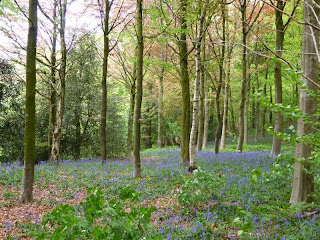 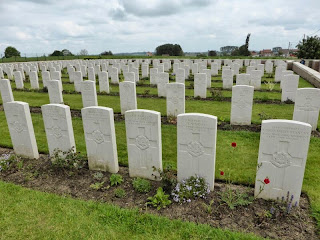 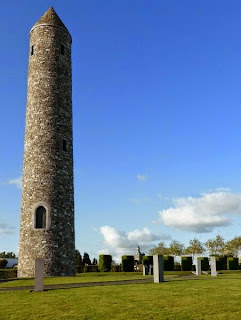 We are staying in a village called Kemmel.  Today we went for a walk to explore the area, and up to the top of the Kemmelberg Hill. The word for footpath in Flemish is wandelpad, and we followed the markers through the beautiful countryside.
We are right in the middle of the area where the worst of the fighting took place in the First World War, and the trenches for both sides ran right through here.
More than 600,000 soldiers died in Belgium during the war, and there are more than 1,000 Commonwealth War Cemeteries.
Our wandelpad took us past a small one with about two or three hundred immaculately kept headstones. Very movingly, the first inscriptions that I read belonged to the Notts and Derbys Regiment and they all died in late April and early May, exactly 99 years ago.
They were joined by soldiers from Leicestershire, Lincolnshire and South Yorkshire as well as others that simply said 'A soldier from the Great War, known only to God'.
The final photo is of the Peace Park which represents those who died from the 'Island of Ireland'.