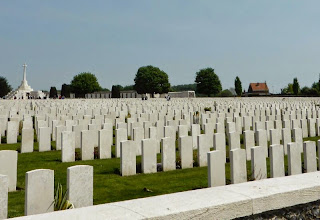 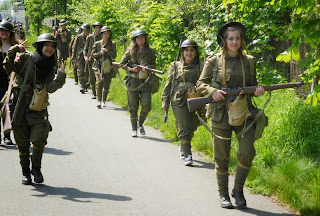 It seems almost wrong that we should be enjoying ourselves here, when so much tragedy surrounds us.
However, we are learning lots about the First World War, and maybe I am passing some information on to my blog followers.
We had a lovely day, cycling in the beautiful countryside around Ypres and Passchendaele. We followed another 45k route and the weather was warm, the sun shone, and the roads were full of cheerful cyclists.
Our main stop today was at Tyne Cot which is the largest British military cemetery in the world. It was nice to see so many other visitors there too.
We also went to a museum and learned about the battle of Passchendaele, which started in 1917.
Very briefly, it lasted for 100 days and during that time there were 245,000 Allied and 215,000 German casualties, and only 8 kilometres of ground was gained.
We then came across the next generation, who I guess were also here to learn about the Great War.
For some reason, this group of very cheerful girls were dressed as WW1 soldiers and were marching along our cycle path.  They were very friendly and were much more keen on waving to us than staying in any type of formation though.