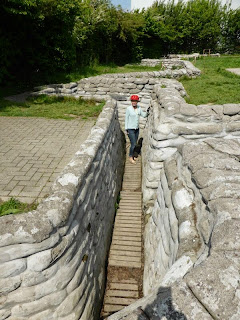 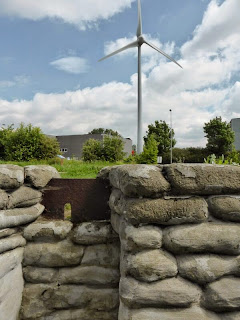 This is a good example of what the trenches were not like in the war, ie; dry, clean and quiet.
The Yorkshire trenches were discovered in 1997 when a new industrial estate was being built on the outskirts of Ypres. A small section has been restored and it is very eerie standing in them.
In the actual war they were often knee deep in mud and water, and the second photo shows a place where the soldiers would fire through the little metal gap at the enemy.
If anyone fired through it now though, they would hit one of the biggest wind turbines that I have ever seen.