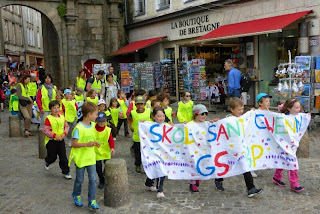 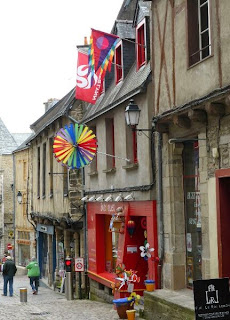 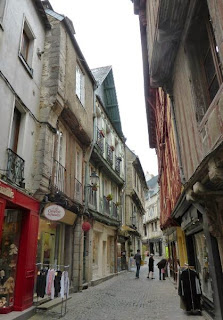 I organised our cycling route today, although it looked like it might get a bit tricky, in places. On my map the D199  reached the edge of an inlet, then turned into a dotted line across the water, but carried straight on the other side.
Darren thought there might be a tunnel, I thought a ferry, but when we arrived, there was neither.
It was only about 100 metres to the other side, but a sign said 'no swimming', so we had no option but to head back to Vannes.
We then sat at an outdoor cafe having lunch as hundreds of school children marched past us chanting slogans and carrying banners.
We didn't know what to make of it - perhaps they were on strike, or on some sort of keep fit regime?
Yet again we were wrong. It turns out that every year there is a 72 hour relay parade, from one end of Brittany to the other, to collect funds to raise awareness of the Breton language.
They have obviously done quite well in previous years, as  Brittany is a bit like Wales, in that all of the roadsigns are written in two languages.
I don't think that I have heard any locals speaking Breton, but I was on the look (or should it be ear) out when I went for a wander around the lovely old town.