Back in England at last 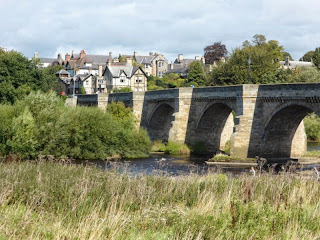 We left Edinburgh this morning, and I wanted to see Hadrian's Wall on our journey south.
The first surprise was that the wall is not at the border between Scotland and England, but is roughly at the narrowest point between the east and west coasts.
I think that I was expecting the Wall to look similar to the Great Wall of China, so we drove right through where it was supposed to be and didn't notice it. We did stop at a pretty town called Corbridge, that used to be a garrison town for the soldiers, but it wasn't quite the same.

The final stats for our activity challenge in August are:
●  Vertical height, approximately 10,170 metres
●  Number of steps walked, approx 543,000

Strangely, none of our clothes fit us anymore as we have lost quite a bit of weight.
We are now going to spend a couple of weeks visiting friends and family and then we are heading back to France.
I haven't thought of a French challenge, but almost unbelievably, the Eiffel Tower is just over 300 metres tall, so on average, we walked to the top of it every day in August!