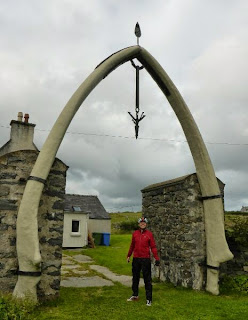 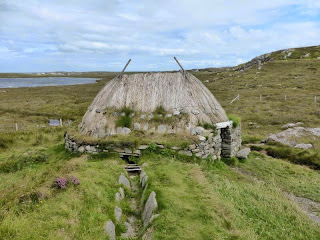 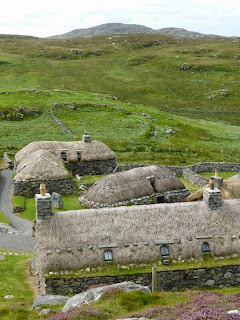 I had heard of the Isle of Lewis, but it turns out that it is attached to the Isle of Harris and they are actually one biggish island. Very confusing.
I prefer Harris (where we were yesterday) as it is much more rocky, scenic and almost all of the houses are painted white. They stand out nicely from the grass and Heather, and look very pretty.
In contrast Lewis is flatter, peat boggy and most disappointingly, almost all of the houses are pebble dashed and a dirty grey brown colour.
Today we hit the Lewis tourist trail and first stop was the Whalebone Arch. It didn't detain us long and was in someone's front garden.
It was absolutely massive and Daz looks a bit nervous in case the spike lands on his helmet. We found out later that the whale wasn't hunted, but washed up on a beach nearby about 100 years ago.
Second stop was the Norse Mill and Kiln. It consisted of two little restored buildings, one where grain used to be dried and this one - pic two, where a water wheel turned a large millstone to grind flour.
Our main stop was the Gearrannan Blackhouse Village which was a beautifully restored little crofting village. We looked around a house that was styled from the 1950's and was very cosy. The most surprising thing about it was that it was built on a hill, and rather than flattening the floor, all three rooms sloped downhill. However, the buildings are really low to keep out of the wind so maybe the builders had no choice.  Also surprising was a little room at the back that housed both a large weaving loom to make Harris tweed and a straw stall for new born cows.
Unfortunately, that was it for local attractions that we could cycle to. We also tried to get to the coast, but couldn't find any way of reaching it.
Ps, on a positive note, the wind is dropping slightly and we only got rained on twice!