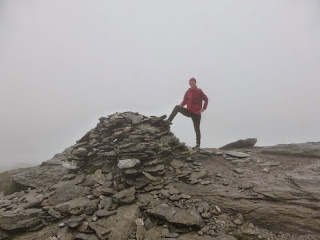 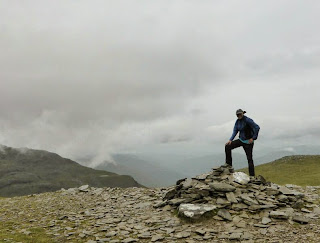 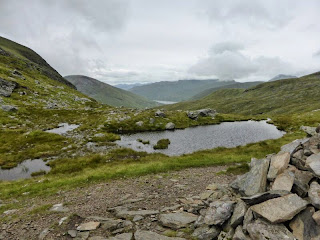 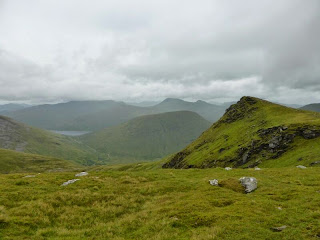 A Monro is a Scottish mountain that is higher than 3,000 feet above sea level and apparently there are 284 of them. Many people collect visits to them, and we have started this enormous task by bagging two today.
My photos run backwards and show me at the top of Beinn Dorain and Darren at the top of Beinn an Dothaidh. My mountain is higher, so maybe that is why my cairn is bigger!
We set off quite early as the weather forecast was for heavy rain from lunchtime onwards and we are a bit wussy so didn't want to get too wet and cold if possible.
Our bus dropped us at Bridge of Orchy and we joined the footpath just behind the station and headed upwards. After a long hard slog we reached a t junction and turned left to climb Beinn an Dothaidh. The path was visible at first then suddenly disappeared, leaving us wandering through a peat bog with lots of hidden ponds and streams. At one point Daz jumped right across a dodgy looking bit, but I decided to step daintily through it. Big mistake as my boot sank and it wouldn't come back out, it was as if the bog was trying to suck me in. Managed to escape with boot intact (just), and eventually found the top.
I had planned to eat my picnic there, but it was freezing so instead put on gloves and hat and braved the bog back to the t junction.
Took a quick break then headed up the other side to Beinn Dorain. The rain really got going and clouds covered the mountain, so we couldn't see very far ahead. I took the lead and took us along the wrong path, and we then had to scramble up a very, very steep slope to find the right route.
Suddenly the cairn appeared just ahead in the mist, so we quickly circled it then headed back down to civilisation - well the pub opposite the bus stop.
Ps, it was actually really good fun.