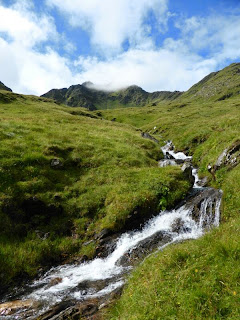 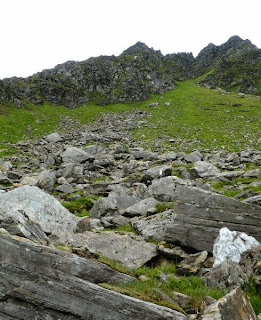 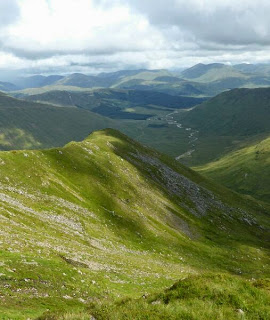 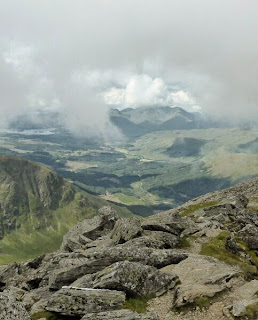 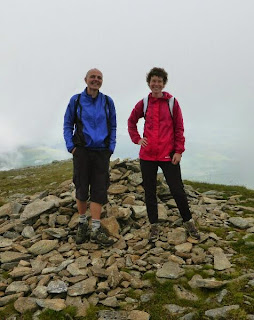 We are still at Tyndrum and today we cycled from the campsite along a rocky track to the start of the walk up Ben Lui.
This monster is 1,130 metres high and towered above us as we got to a fast and furious stream. It rained non stop last night so the water was really high. The guide book just said to cross it, so we followed it up stream for a while, then plucked up the courage to slide down a sloping rock, jump on to a large rock in the middle, then leap to the bank on the other side. It certainly got our hearts racing.
After that I thought it would be straightforward, although the path led steeply upwards, but then it disappeared, leaving us alone in the middle of a gigantic boulder field.
We clambered to the top then had to climb up through a steep gap in the rock face to get over the ridge. Annoyingly, the path reappeared from the opposite direction and we followed it again until the going got tough and it left us once more.
Darren consulted his smartphone and we made a vertical beeline for the top and eventually reached a rather under sized cairn, where we posed in a very relieved way.
Heading back down was almost as difficult as going up, and we passed the wreckage of a little plane that must have crashed here some time ago - worrying.
We were happily following the only other person that we saw on the walk, but instead of taking the boulder field way to the bottom, he appeared to disappear off a vertical cliff. We dithered about for a while, then found a section that didn't seem quite so steep, so I mainly slid down it on bum, in my new waterproof trousers.
Once back at the bikes the rain lashed down, as we negotiated the steep rocky track back home.
Can't believe how exciting, and dangerous walking can be!
Number of steps walked in August - 73,939
Vertical height - 2,205 metres