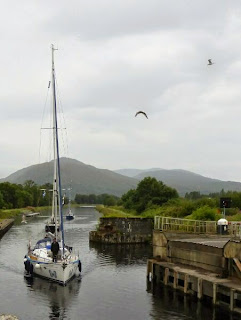 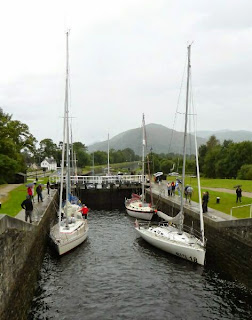 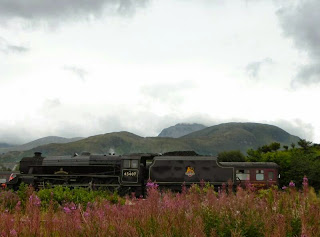 Had a quick cycle ride this morning to see Neptune's Ladder on the Caledonian Canal.
It is a set of locks that take boats from Loch Linnhe via the canal to Loch Lochy.
We arrived just as a clutch of boats were making their way upwards. I may have made it sound more exciting than it actually was, as it is a very, very slow process. I spoke to a lady on a boat who was half way up the locks and it had already taken her two hours to get that far.
We hung around for about 20 minutes as the steady drizzle changed to more purposeful rain.
We then cycled back to the campsite, stopping to take a photo of one of the Hogwarts steam trains as it was getting ready for the days work. Coal was piled high behind the footplate and smoke was gently seeping out from the chimney.
We are now at home and it has been raining solidly for the last ten hours and is forecast for at least the next 24!
Good old Scotland.