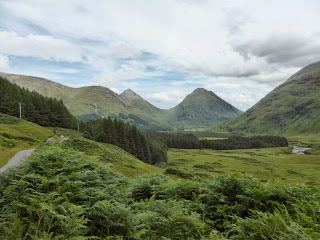 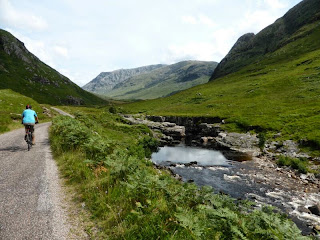 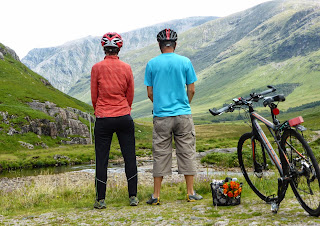 If you have seen the James Bond film called Skyfall, then you will know that James spent his childhood in the Highlands of Scotland. The house where he lived was called Skyfall, and was in the middle of nowhere.
It was actually filmed in Glen Etive, although his house did not really exist.  The Glen is 13 miles long and is almost completely deserted - apart from fellow James Bond hunters.
We cycled the whole length of it and the scenery is stunning. We also tried to recreate the scene where James and M stand at a viewpoint looking out for the baddies to arrive. Obviously, Daz played Bond, while I tried to be Judy Dench and my bicycle played the part of the Aston Martin.
Even I can see that we were not very successful.