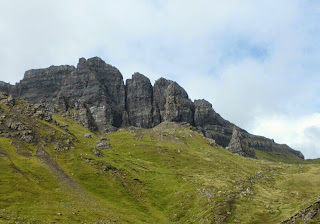 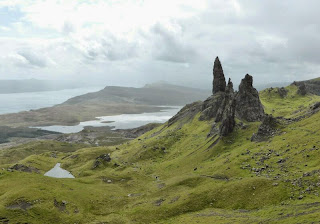 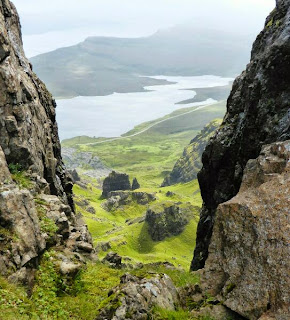 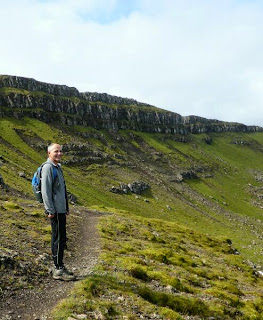 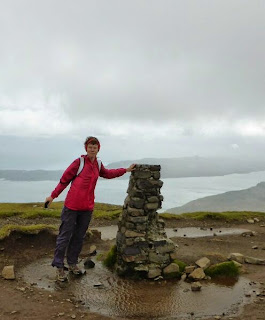 Another stressful walk today, this time around the Old man of Storr. It is one of the most popular walks in Scotland and we cycled to a large and busy car park. The path was very defined and loads of other walkers were heading our way.
Unfortunately, we did not realise that the Old man is actually a small spikey rock in front of the huge rockface, (I thought he was at the top) so we did not notice that almost everyone else reached it, took a few photos, then turned around and walked back.
We carried along a smaller path that led around the back of the serrated edged rocks in picture one, and as is usual, it then disappeared. I then noticed a couple right up at the top, so we started climbing up towards them.
The views through the gaps at what I had thought were the old man's teeth, were astonishing and terrifying. I had to lie down and crawl towards the edge to have a look, but kept a good distance back as my knees were knocking.
Afterwards, we carried on up a little path that appeared along the ridge, the sun appeared and all was calm and relaxed - pic 3.
Eventually the path went up almost vertically and I was panicking as I thought that we would end up on a knife edge at the summit.
Imagine my surprise when we gingerly looked over the top and there was a massive expanse of grass, with the trig point in the distance.
On the top it seriously was blowing a gale and even though the trig was a long way from the edge I couldn't manage a smile as I was worried about being blown off the edge.
We were following what we thought was a circular route, but we couldn't find the point where it went back down over the edge (mainly because I was so scared of going near it), so we kept walking along the top in the gale, following a little path.
We then came to a section that looked as if there had been a landslide, we lost the path and the route down was super steep, wet, slippery and windy. I had to keep shouting out 'calm, calm, calm, etc' all the way down, but I don't think it helped me much.
Obviously we made it back as I am writing this, but I am glossing over a lot of stress.  I could definitely do with a reassuring tot or two of whisky tonight.
Vertical height - still no stats as very slow Internet here, but it should be a few.
Grey hairs - quite a few new ones today.