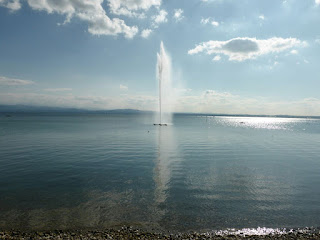 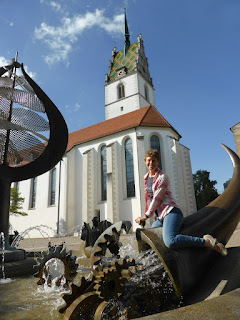 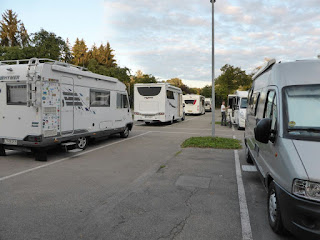 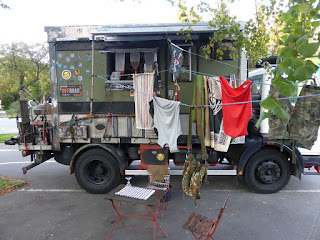 We drove around to the northern side of Lake Constance this morning and have arrived at Friedrichshafen. It is a busy town with a lovely promenade along the lake.
It has a big fountain in the lake and other water features in the town. Pic two is a fountain with a mechanical theme and there was lots of hand holds as people were encouraged to climb on the statues. I chose a cone shaped one, but there was also a big lorry engine and a very strange cow with a human head.
The town is very busy and when we got to the campsite that we had chosen on the edge of town, we found that it was full.
They had an overflow car park next to the road which you can pay for by the hour while visiting the town, or pay €13 to stay for 24 hours. We definitely wanted to see more of Friedrichshafen, so chose this option.
There are lots of other people staying and pic three is the view from the front of our van. As you can see, it is filled with similar vans to ours and it all looks normal and a bit boring.
However, pic four is the van to our side. The owner is very individual and walks around in big desert boots and shorts. There is a sign on his van that says 'born to be wild' and he sat outside tonight at his little table having his dinner.
He cut his bread and cheese up with an enormous hunting knife, which I thought a bit worrying.
He seems to behave as if he is on a safari in the middle of Africa, rather than parked by the side of a road in Germany, but he is pleasant, and is taking advantage of the nice weather to dry his washing.