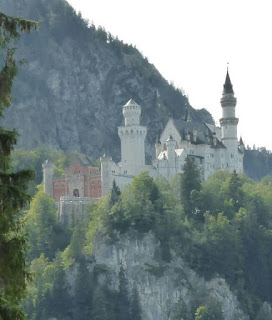 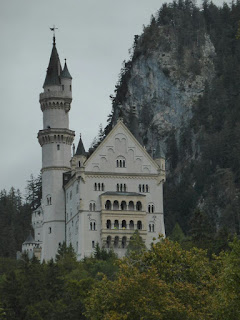 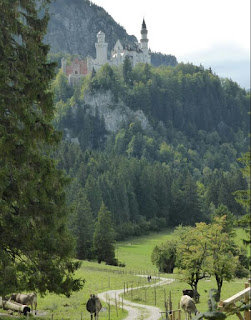 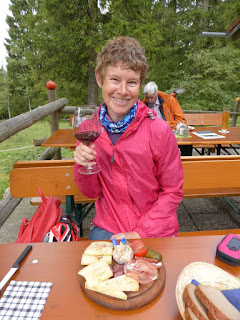 Today we went to see Schloss Neuschwanstein, which  was the inspiration for Walt Disney's famous Sleeping Beauty Castle.
We were going to buy tickets to look inside, but the queue was so enormous, that we decided not to bother.
Instead, we spent the day walking and cycling around, trying to get good shots of the Castle.
Firstly, a little bit of history - in 1869 King Ludwig ll of Bavaria decided that he wanted to recreate a medieval castle. The first thing that he did was to destroy a real medieval castle to build a new one in its place. He hired a theatre designer and spent the rest of his life building the fairytale.
I have to be honest now and say that close up, on a cloudy day and with hundreds of other tourists milling around, the castle is not very exciting. Pic 2 was the best that I could do.
It is far, far better to see it from a distance, but that is a lot easier said than done.
The castle is on the top of a hill, which is covered in tall fir trees that obscure the view.  Behind it there are high vertical cliffs and to the front is a large lake.
The best way to see it would be by helicopter, but our budget doesn't stretch that far.
Instead we got on our bikes and kept cycling until we found a little road that eventually took us through a field of cute cows with bells under their chins.
This was where we got our best pictures, found a tiny cafe and had our lunch.
Pic 1 is a maximum zoom shot of the castle and it is looking a bit magical - if very far away.
Pic 3 is the view from our table and pic 4 is our lunch - a ham and cheese extravaganza.