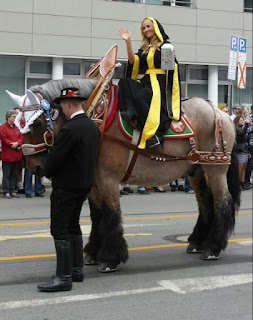 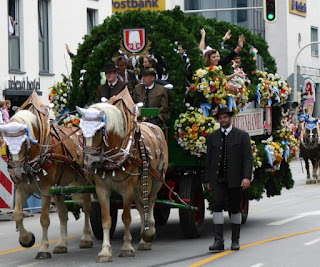 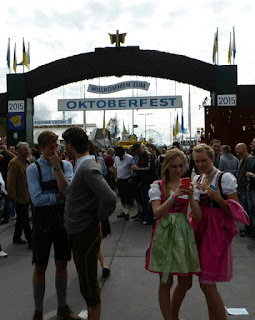 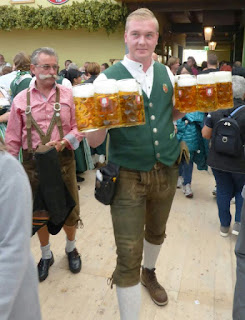 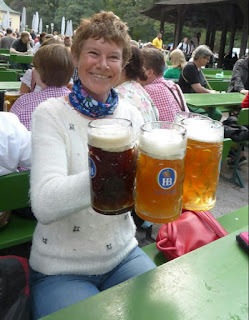 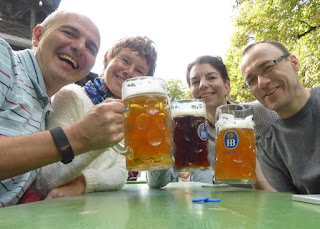 Exciting day today as we are meeting up with Susan and Paul, then going to the Oktoberfest.
The Oktoberfest is a giant fair, with the main attraction being beer, which is drunk out of huge glasses in enormous tents.
A few small problems occur to me which are;
* I don't like beer
* The glasses are too big
* The tents get so busy that we won't get a seat anyway
Not to be deterred, we are here anyway and start by watching the parade that goes through Munich to the fair ground.
It was a great show and all of the breweries have carts filled with barrels that are pulled by shire horses. There was also brass bands, and carriages full of local people in lederhosen and dirndl dresses, who were testing the beer and waving to the crowd.
The crowd deserve a special mention as thousands of them were dressed in the local costume and looking brilliant.
At 12 noon exactly, cannons were fired and the beer barrels were ceremoniously tapped, then the event officially began.
All of the beer tents were full and the whole area was packed, but we did manage to walk through one of them. It was full of long benches and tables, with an umpah band on a raised platform. They were playing a yodel song as we went through, but that might just have been unfortunate timing on our part.
We stopped near the bar to watch the waiters bringing out the beer. Apparently it is possible to carry up to 16 glasses at once, but they whizzed by so fast that it was impossible to count.
We then did a tour outside and there are stalls selling everything you could think of apart from beer, which is only allowed in the tents. We saw pretzels, iced gingerbread hearts, scary fish, sausages and we even found a wine bar. It felt good drinking a glass of wine - subversive - Susan called it.
Eventually, we knew that we had to go and try a beer somewhere in Munich, so we headed for the Englisher Gardens - they have huge a outdoor bar that is very popular on a warm afternoon.
We ordered four of the litre glasses, and tried lifting them with one hand. Susan managed a few seconds, but they were so heavy that I could only pick them up using both arms.
Surprisingly it tasted quite good, so we even had another half of one each. That was plenty and then we headed home for a nice lay down.