Night time at the Oktoberfest 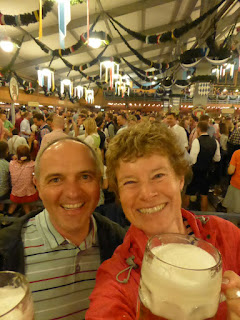 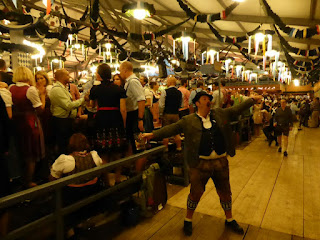 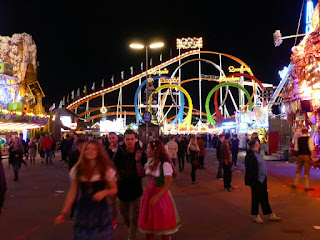 After dark on Sunday night we headed back to the Oktoberfest fair ground as we knew that it wouldn't be as busy later in the day.
We went inside one of the beer tents and managed to get a seat at a table.
When I say 'tent' it actually held over 10,000 people, so it isn't something that you would take on a camping trip. Also, when I say 'seat' I meant that all of those 10,000 people were standing on their seats singing along to the music from a band in the middle of the tent. Quite a few people were also dancing on the tables.
It is important to find a seat as you are only allowed to buy a beer if you have one, and the waitress then puts the beer on the table. After that people jump onto their seat, bash the heavy glasses together and shout 'proust', before waving them in the air while singing loudly.
It is very, very rowdy, very cheerful and most people had made a big effort to dress up. Shame we let the side down really.
Ps, Daz really wanted to buy some lederhosen but when would he get to wear it again?