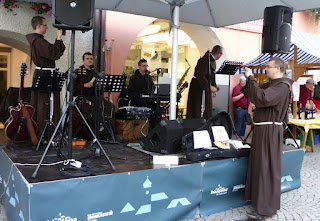 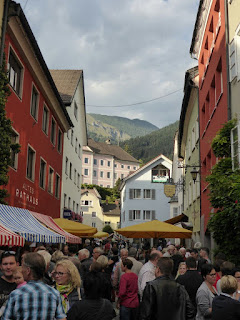 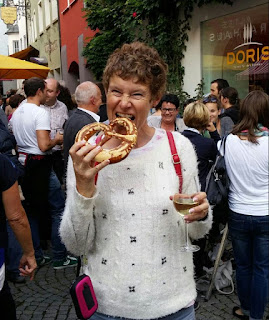 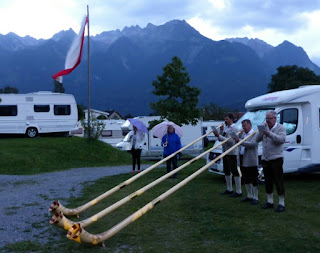 We are in Bludenz, Austria today and we had a good afternoon out.
We walked into the centre of the town found a band of monks playing cheerful umpah music, and lots of little stalls scattered around the nearby streets.
We had stumbled across the 20th annual Kloster Market which is run by monks and nuns from monasteries across the whole of Austria.
They had made lots of the products on sale and there was beautiful candles, nativity scenes and fruit flavoured brandies.
We bought wine and pretzels from a stall manned by monks, and open sandwiches with pate and raw onions on top from a nun. She promised that they would be 'wunderbar', and it was absolutely true.
Mind you, the wine and pretzels were pretty good too. Note to self - in future when posing for a photo while chewing and drinking, try not to overact as it isn't attractive.
Unfortunately, we had to drag ourselves away as we had to get back to the campsite for another engagement.
The owner and his family were due to play Alpine horns for the guests. The horns were enormous and rested on little stands. All three horns looked the same but one was really deep and the overall effect was very tuneful.
Very interesting day.