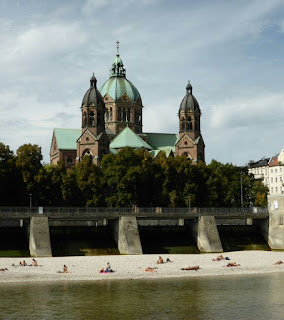 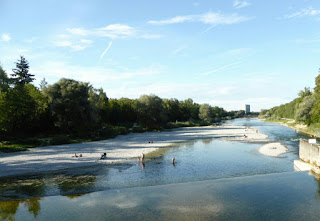 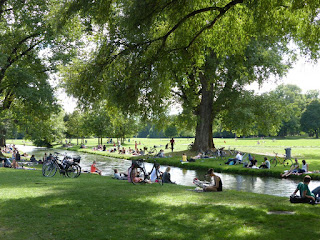 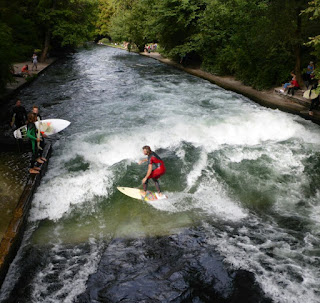 Just over a month after setting off from England, we have reached our destination in Munich. Hurrah!
We are meeting up with friends at the weekend to visit the Oktoberfest, and we have got here a few days early to get a space in the campsite and to see the sights.
Our campsite is a few kilometres outside of the city centre and right next to the River Isar.
We set off this afternoon on a cycle ride along the river bank, following flocks of other cyclists with the same idea.
It was a hot and sunny afternoon and people were paddling and sunbathing along the river bank.
We had heard that people often sunbathed naked and I have to report that this is true - there was quite a few on the beach in pic 1, but I think the they are too far away for you to check!
The cycle path took us all the way to the Englischer Garden. It is one of the largest urban parks in the world and is really lovely.
It has a lake, cafés, lots of cycle paths and an incredible stream running right through it.
The stream was shallow and fast running, and hundreds of people were relaxing alongside side of it. Pic 3.
We followed the stream to the entrance of the park and found surfers showing off their skills on a huge wave of water.