Cycle ride to the Blue Lagoon

It is Chinese New year's day today and most of the shops are shut in Alor Setar.
Our lovely hostess spoke to the guy at the bike hire shop and persuaded him to open especially for us, so we ended up with two very nice bikes.
Unfortunately he said that it wasn't possible to raise the seat height, so they were designed for people who were at least a foot shorter than us. 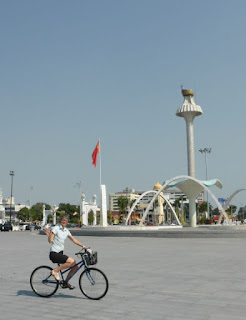 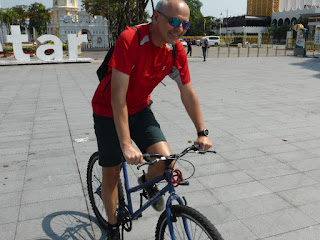 Darren tried to solve the problem by cycling standing up in the style of a yobby teenager, while I stayed seated with my knees not far from my chin.
Obviously, we went out in the mid day sun so it was extremely hot, and with no shade at all across the paddy fields.
Our first destination was the Blue Lagoon that was more the width of a canal, but you can't say that it wasn't blue. 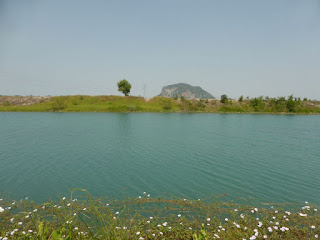 We were also planning on cycling to the small mountain beyond the Lagoon, and then maybe on to the seaside to visit a Fort. Instead we decided to save our knees, lock the bikes up and eat doughnuts in the air conditioned shopping mall instead.