It is difficult to get a good view of Mount Fuji, as we found out today. Apparently it is only visible for 80 days per year and for the rest of the time it is covered in cloud.
We woke up early, looked out of our hotel window to find that the sun was shining, so we decided to try to see it.
We managed to start by catching the wrong train, and then had to wait ages for the second one, but eventually we got to the bullet train station and into seats on the right side of the train. One of the most famous ways to see the Mount Fuji is from the train as it whizzes from Tokyo to Nagoya. We caught the slow train because we wanted to get off at the nearest station, enjoy the view and then head back again. 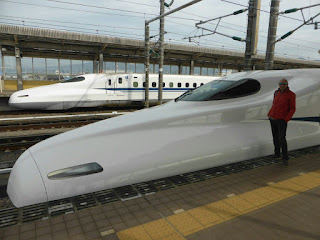 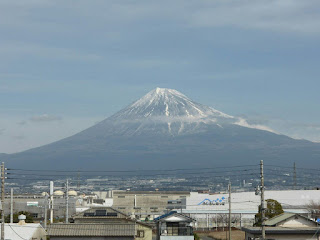 We were lucky and this view is taken from the station platform. We were surprised by how industrial this side of the mountain was and we took a walk to try to find a prettier viewing spot.
There was nothing within walking distance, and the best I could do was a shot sponsored by  Toshiba! 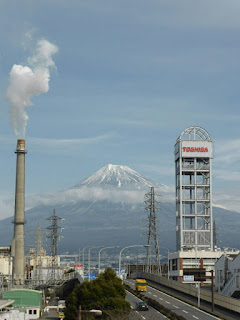 Afterwards we caught a train to the coast where I thought that we could get a more natural looking photo, but no luck. We couldn't even see any sign of it. I don't know if we were in the wrong place or if the clouds were hiding it.
We tried a new treat instead, which was a strawberry covered in toffee (like a toffee apple) with a Ritz biscuit stuck to it.
The lovely girls had all bought one so we did the same. 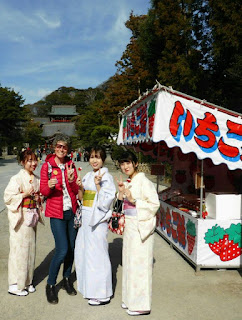 The final outing of the day was a classic arranged by Daz. A tasting trip to the Kirin beer factory. What fun it was, and as the only non Japanese visitors we were given a little book to read when the guide explained things to everyone else. It was really high tech and interactive. Best part of all of course was the tasting and the guide took our photo for us. 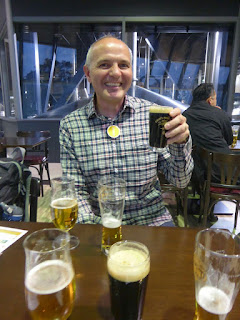 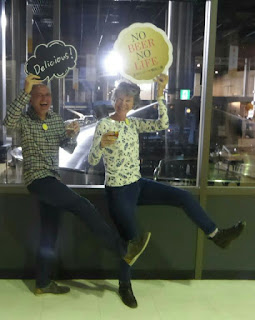 She took quite a shine to us, said she liked how we were always smiling and that she wished that she was our daughter!
Posted by Christine at 03:28