We left our hotel and caught a vintage vehicle to the bus station. Apparently these little three wheel taxis are a famous sight in Trang. There used to be over 500 of them, but now they are down to only about 100.
Our driver was a real racer and we clung on as he overtook everything else on the road in his rush to get us to the bus station.
We were worried that he might roll the taxi on the corners so we were trying to shift our weight over to compensate. 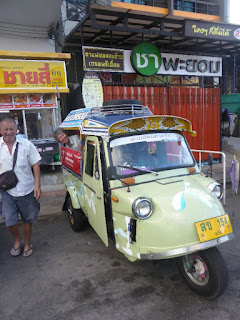 There he is on the left of the photo. We weren't actually in a rush and had a 40 minute wait for our first bus to Hat Yai. This journey took two and a half hours and then we took another bus to the Malaysian border.
The driver charged us for three tickets, including one for our big suitcase  but as they only cost just over £1 each, then it seemed money well spent.
Once across the border we caught a train to the Malaysian town of Alor Setar and by 3pm we were settled in. 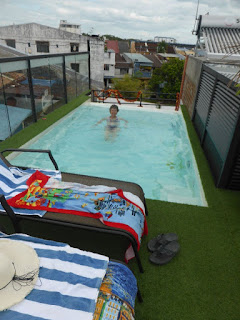 The much anticipated swimming pool could also be described as a large bath, but it is up on the roof terrace and we had the place to ourselves.
Posted by Christine at 05:18