We found out today that we are staying in Samurai and Ninja territory. We set off for what we thought would be a quiet Sunday morning visit to Nagoya Castle. However, when we got there we found out that it was a special day.
There was free entry to the castle and grounds, which is always a good thing, and events. 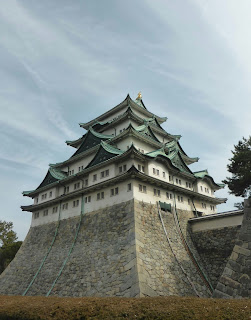 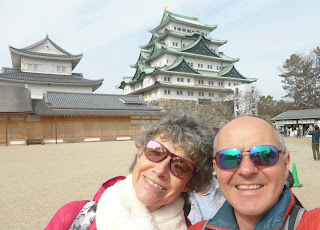 The castle was built in 1610 but was destroyed by bombing in World War Two. The main castle was rebuilt in the 1950's and has a huge wall, moat and interesting towers.
There was also a wooden Palace inside the grounds that has just been rebuilt. It is a very traditional Japanese building made of wood and with paper and laquer screens. It is also beautifully painted to look exactly as the original, with loads of leaping tigers, flying cranes and countryside scenes. This is where the Shogun, or Lord used to live and receive guests. 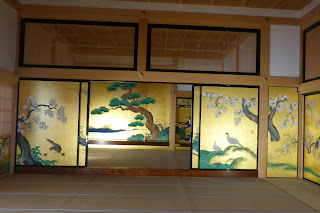 After seeing the Palace we were just in time to watch the performance. The costumes were great and we saw the three Samurai Kings from Nagoya who unified Japan, and three sword fighting and jumping Ninjas. 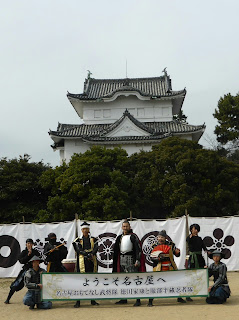 Our afternoon outing was to the Railway Park where we saw lots of trains - as you would expect. It was better than that sounds and the trains were extremely glamorous. 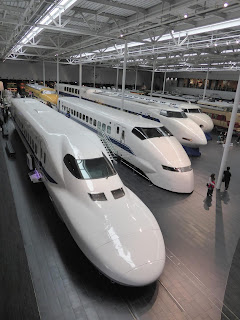 We also tried Bento boxes which are traditional Japanese lunches that people take to work and on journeys. It looked gorgeous and very colourful, with 30 different flavours according to the description. I can't say that we are in a rush to have another one though. 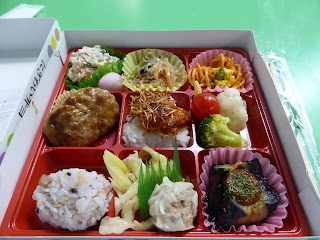