Today we started off with another run along the river, had a little break and then went straight into tourist mode.
We walked to the Hokusai museum to find out about the famous screen print painter who lived in the area. 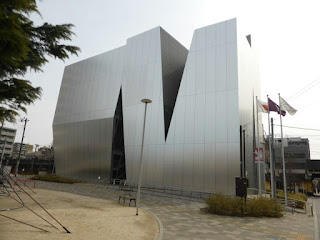 Really interesting, then onto the Sumo wrestling museum that was just a few streets away. The writing outside was all in Japanese and we couldn't work out how to get inside, but we took a photo by the entrance, so I suppose that was a reasonable effort. 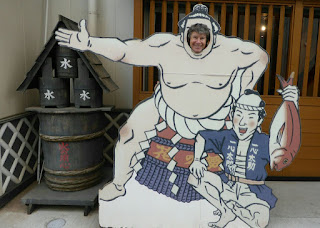 I don't think that I would have made a very good wrestler. Next and just around another corner was the huge Edo Tokyo museum. We went inside up a very long escalator that actually flattened out part way along and then went up again.
It is a major museum explaining the history of Tokyo and all about the Samurai warriors, and it is has life size buildings, people and street scenes.
It was busy but we found a sign saying free English guided tours.  We got our own private guide who was young and took his role very seriously. He was very knowledgeable and delivered all of the facts in a robotic kind of way, but we enjoyed it and learned loads. 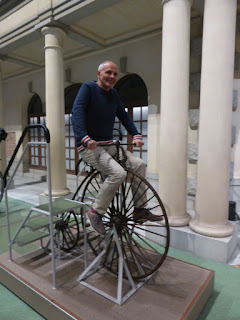 We took this picture after he had left us.
We then set off to the busiest zebra crossing in the world where we added to the numbers by crossing it three or four times just to take it in. 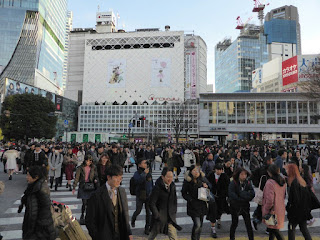 The day then goes a little bit wrong because we then spend 40 minutes in a huge park trying to find a famous shrine. I am in charge of this visit and I am sure that maps in the park kept turning upside down because we walked in a huge circle and eventually got back to our entrance gates rather than the opposite end. Perhaps it wouldn't have been very good anyway.
Next we just enjoyed looking at the busy streets in the dark. We were supposed to be going to see the last night of illuminations but didn't find those either. 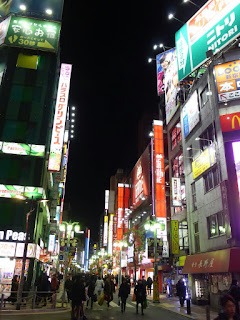 We finished off by catching our underground train from the busiest station in the world. Darren was in charge of the directions for this bit and it went very well.
Whew. A long busy day. Yesterday, we walked 33,000 steps and today 28,000 so quite tired now.
Posted by Christine at 15:41