Tokyo to Sendai by Bullet train

Today we caught the bullet train, known in Japan as the Shinkansen from Tokyo to Sendai. Sendai is 186 miles north of Tokyo, and it took less than 90 minutes to get there, although the train went slowly through the almost never-ending suburbs of Tokyo before picking up speed. 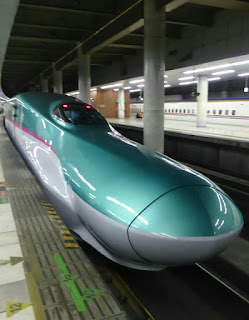 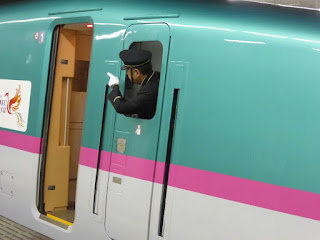 The trains are famously on time  right to the second  and ours set off at 11.26am exactly. We got there early to watch the trains going through the station and they all left as planned.
The guard at the back of the train carefully checks his watch and the second that it ticks over he waves his hand, and off it goes.
The trains arrive about every six minutes at each platform, so it would be a disaster if one was late and knocked the whole lot out of sequence.