Caught a train from Nagoya to Fukuoka today, that is about 700 kilometres, or about 450 miles away. Our journey took less than three hours despite multiple stops and a change of trains along the way. This is our twelfth day with the train pass and we have caught at least two trains evey day.
The latest any train has set off is one minute after the time shown on our ticket and they have all arrived at the exact correct minute. It is unbelievable to watch how efficient it all is, and all of the trains are spotlessly clean.
Fukuoka is right on the west of Japan and is more of a stopping off point for us to visit other places in the area.
However  we set off to explore the city and sights in the afternoon. 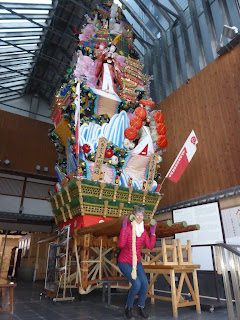 Every year they have a huge parade from the main shrine through the city and this is a slightly smaller version of one of the carts. It looks very heavy and judging by the height of it  very unstable.
A little later we found the shrine and right at the front of it was three large ropes that were each attached to a bell. Japan is full of notices and instructions and we have seen them before that say 'don't ring the gong'. I was totally amazed then when three young girls started pulling the ropes and making a huge racket complete with creaking sounds. We made a quick escape in case any angry monks were nearby. 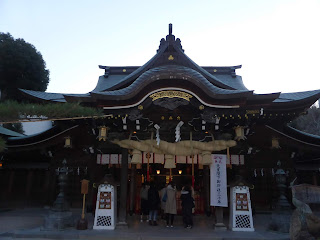