We paid £9 each for a motorbike taxi from our hotel to the pier. It arrived at 8.52, and seeing as the ferry was due to leave at 9am, it was a bit worrying.
We arrived at the pier at exactly 9am and stepped straight onto the ferry, which was actually a long tailed boat full of tourists and their luggage. By 9.02 we were on our way across the short stretch of sea to the mainland, and then along a mangrove edged estuary to our dock.
We then transferred straight into a minibus and by 10.40 we were in Trang.
It is a small town that mainly acts as the hub for tourists going or returning from the islands.
It has an airport  train station and bus station, but we are staying for two nights.
There isn't that much to see in the town, but we had a lovely evening at the Cinta night market. 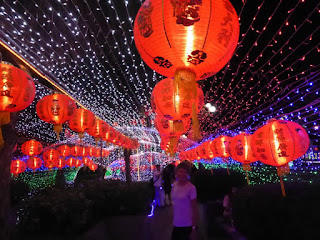 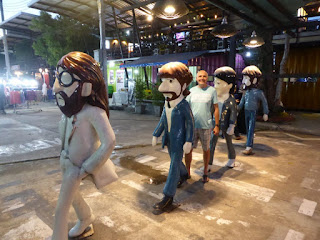 There is an interesting sculpture of the Beatles on a zebra crossing and hundreds of stalls selling all the types of street food.
We were intending on going to a highly rated Italian restaurant, but instead we had crispy pork, fried bananas in coconut syrup and a very reasonably priced Chang in a bar overlooking the market.
There was also a nice clock tower on the main road, with a prominent portrait of the new King. 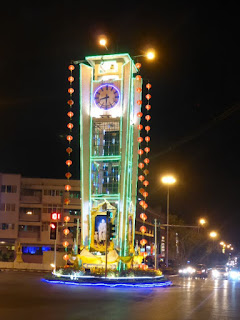