We crossed on the ferry from Butterworth on the mainland to Penang. Dedicated blog readers will recall that we have been here a few times before, and we were also here for Chinese New Year last year.
It seems that their celebrations last for 15 days, and I think that we are on day five. It involved lots of events tonight, and there were many stages set up around Georgetown. Lots of roads were closed and the entertainers walked from one stage to another.
Firstly though, we had a lovely afternoon tea at the extremely posh Eastern and Oriental Hotel. The sandwiches and cakes were all surprises as you could not guess what flavour they would be. 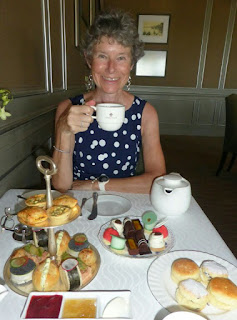 In the early evening we walked around the town to see the celebrations. There was lots of very loud drummers, some lion dancers and an interesting extremely long dragon. 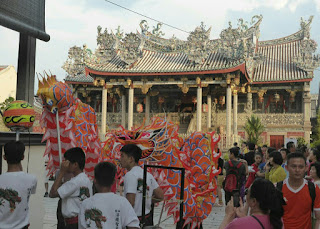 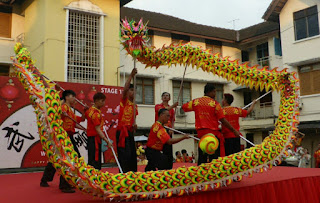 We saw the dancers first as they got ready to perform at the famous Khoo Khongsi temple stage, but caught their act a bit later in the evening. Oh, I have just noticed that they are wearing different clothes and the giant dragon is a different colour, so it isn't the same group. Who would have guessed there would be two of them.
There was also lots of older ladies dancing to traditional music and performing tai chi, although not always in unison. 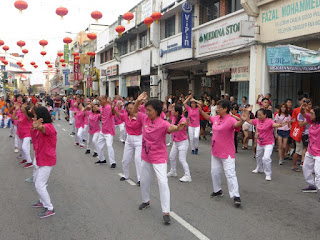 We found a photography corner where dozens of people were posing along side pink flowers and koi carp, so I joined in. 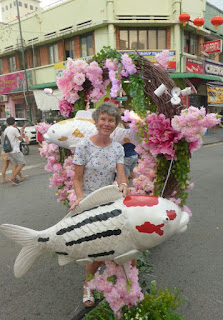 Maybe it is lucky.
Finally  an update about my breakfast cabbage. In the end I really didn't fancy it so threw it away, an unfortunate waste of 30 pence.