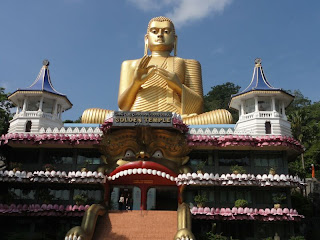 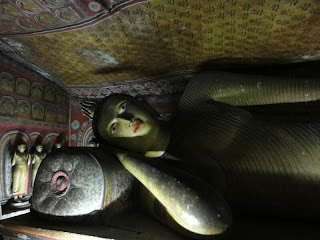 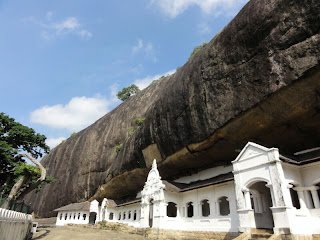 We have just done the second touristy thing in this area. Both it and Sigirya yesterday are world heritage sites, but again we got no leaflets or information.
We knew there were caves and thought we would be going underground, but actually we had to climb hundreds of steps and the caves are a spectacular rock overhang that is now behind a white building.
Reading on the Internet, about 2,000 years ago, the king was exiled from his palace and spent 14 years living with monks in the caves.
Once he was back in power and to thank the monks, he had the caves painted, filled with statues and the building put on the front to protect them - possibly - or these bits might have been added later.
Had my first run in with monkeys on the way up the steps. Had bought some mango pieces and a monkey tried to grab it off me. They were pretty aggressive and Darren went to pick up a rock to throw at it but it stood its ground and just glared at him.
The Golden Temple was weird as it looked very Disneyfied, but I know nothing about it. Sorry, poor effort.