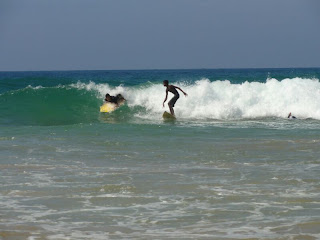 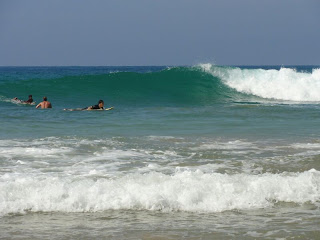 These are pictures from right in front of our hotel. We are on the part of the beach where the surfers gather and there are loads of them. They are out from sunrise until it gets too dark to see and only then do they come in.
Most of them spend most of their time out beyond the breaking waves just bobbing up and down on their surfboards.
We went out to join them this morning and strangely there was about a five minute gap where all of the waves disappeared and the sea was calm.
Darren went out nearly level with the surfers and once I thought it was safe I followed him.
For about 30 seconds we had a lovely time floating about in the water and then suddenly we could see huge mounds of water swelling up in the distance. We were okay for the first one and then the biggest wave in the world broke right on top of my head.
I went under and bounced off the sand, recovered slightly and made a run for the shore while its massive brother wave chased me in.
Why does the sea behave like that?