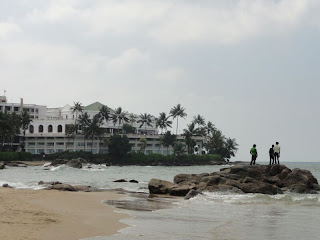 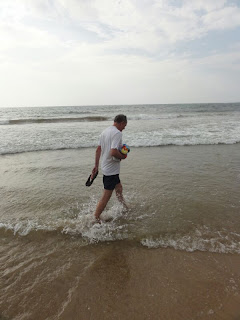 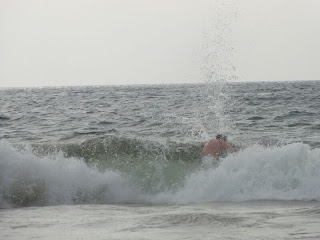 We spent yesterday travelling from Nuwara Eliya to Mount Lavinia. We went by train and it took all day. We had intended on avoiding the trains due to their lateness, but because of our failure to plan a logical route around Sri Lanka, we had ended up in the mountains and did not want to double back yet again through Kandy on a bus.
The day started positively as the train arrived on time but it managed to get to Colombo at least an hour late. We caught a very nice tuk tuk through the rush hour traffic and drove about 12k south arriving in Mount Lavinia just before 6pm.
Checked out the beach today and the whole place is dominated by the enormous Mount Lavinia Hotel. Pretended we were guests and had a look around and it is pretty swanky. Not sure if the same can be said about the rest of the area, but the beach is lovely.
Daz got the urge for a swim and he was soon leaping about in the waves like a dolphin.