Train ride from Negombo to Colombo 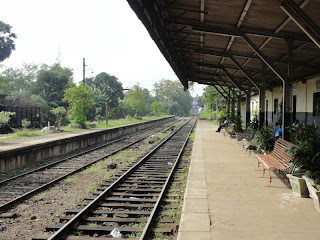 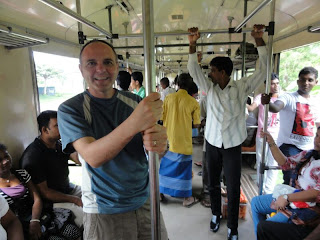 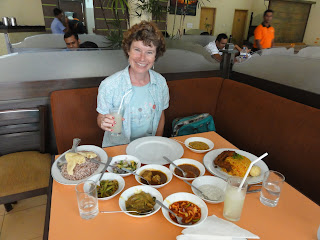 We left Negombo this morning for a train ride to Colombo. The station was interesting and had cows grazing on the second platform. Also, the ticket office was closed. We found someone to ask who was very helpful, but when I looked closer I realised he was sipping neat Arack from a bottle. (Arack is the local firewater.)
His advice was good though and I eventually bought the tickets for the 40 kilometre journey and they cost 20 pence each.
We stood a lot of the way as it was busy and all of the doors and windows were wide open for the whole journey. On board with us were buskers, orange, popcorn and crisp sellers, very sad beggars and a man selling tiny bottles of magic medicine.
Arrived in Colombo and got in a tuk tuk. The driver said he knew where our hotel was but unfortunately, that was a complete lie. He tried to tell us it was miles away, but then started stopping randomly at streets beginning with B and telling us to look for the hotel.
Daz then got out his tablet where he had downloaded an interactive map, so he started giving directions to the driver. He didn't seem to like that so started to drive like crazy, overtaking everything on either side of a very busy road.
I shouted at him to stop because I was going to get out, but he just said 'don't worry madam, I am very safe driver', and sped up again. Darren carried on giving directions and suddenly we were there.
Predictably the driver wanted more money but Daz held firm and I just kept shouting that he was a very bad driver!
Just had a great curry that cost less than £6 including tips so calming down nicely.