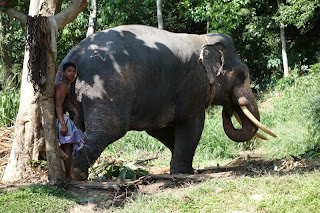 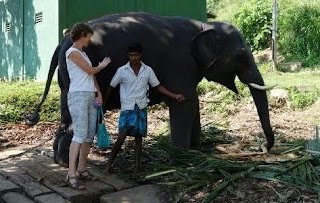 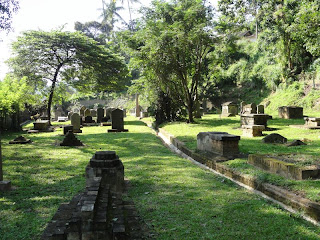 We have just been to yet another cemetery, this time it is in the city centre and is the final resting place of the first British inhabitants of Kandy. It was recommended to us by a tuk tuk driver who said that his father was the caretaker there - this is true - we met him and he was very nice and helpful.
We got a bit lost along the way and came across about half a dozen working elephants and their mahouts. Had my photo taken with one that they told us was a baby but he seemed pretty big to me.
We found the cemetery which was quite well hidden and there were no tourists around, just a lazy dog and quite a large monkey.
Quite a nerve wracking day, animal wise, for me.
We spent some time trying to find the grave of John Spottiswood Robertson as I liked his name and in 1856 he was recorded as being the seventh European to be killed by a wild elephant.
Unfortunately his grave wasn't as interesting as his name and it appeared to be a neatly stacked pile of bricks.