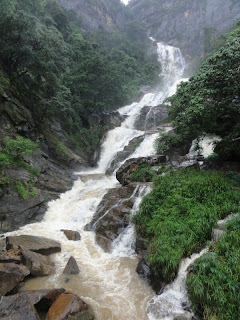 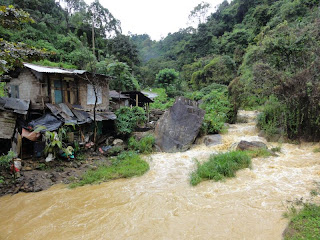 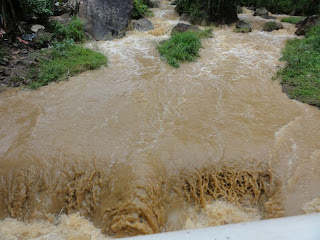 Saw a massive waterfall from the balcony of the hotel and decided that must be the one that was highly rated by TripAdvisor.
We set off with a little map and with plans to do my 10k walk.
Good journey, all downhill but with amazing scenery along the way. It was mixed in with clouds as we started well above the cloud line and descended in to them.
Stopped at a good sized waterfall along the way with a shack right next to it that was worryingly close to the brown water torrent.
Carried on and passed cows grazing next to the road, monkeys and a kingfisher sitting on a telephone wire.
Turned a corner in the road and saw a massive waterfall that cascaded down a really high cliff, (definitely not the one we saw from the balcony) although it was difficult to see as the torrential rain had started up again.
Took shelter in a little cafe near the base and the weather cleared enough for a second look.
It is easy to catch a bus or a tuk tuk back up the hill, but we had a target to meet so off we trotted.
The rain soon started up again and the road turned in to a mini river although our top halves were not too bad as we both had pretty umbrellas. Mine with a Union Jack and Daz had large blue flowers.
Many drivers kindly stopped to offer us a lift including lorry drivers and some nice French tourists, but if you have a goal you need to go for it.
Anyway, we knew that the shower in our room was only solar powered and as there had been zero sunshine, then the water would be the same temperature as the rain.