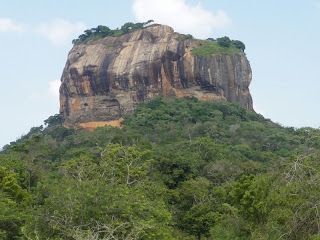 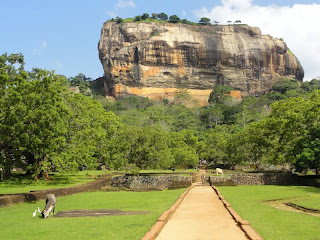 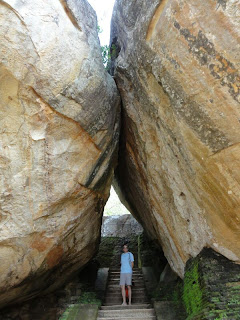 After five lovely days in Kandy we have caught a bus to Dambulla, which is about 50 miles north.
We have come to see a place that has sometimes been called the eigth wonder of the world.
We got there in the afternoon and I imagine most tourists get there early as once again, we were eerily alone.
Sigirya is a 200 metre rock outcrop that has been inhabitanted since the 5th century and used to have a large city around it's base.
Nowadays, it has cows grazing among the ruins of the city. However, they were beautiful cows and each one had an egret friend that followed it whenever it moved.
We walked through a ruined water garden and then through enormous rocks that were balanced precariously on top of each other.
At the bottom of the steps of the climb there were signs warning people to be quiet to avoid hornet attacks. I had already heard about this and was getting a bit worried. At that moment we met some Chinese tourists going in the opposite direction who yelled over to us to ask where the museum was. I expected swarms to appear as I tried to whisper the answer to him.