Colombo to Ella by train 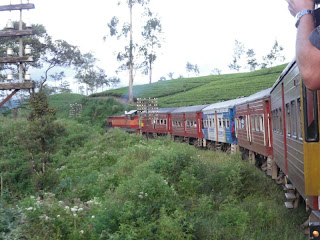 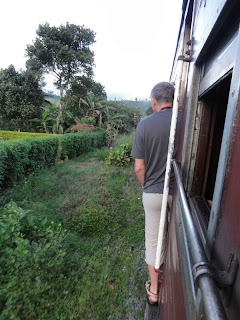 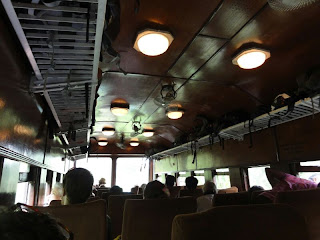 We bought tickets in what is called the observation carriage, which is the best class of ticket - about £7.50 for two.
The carriage was a real surprise and we could sue Sri Lanka Railways under the trade descriptions act. It should really be called the non-observation class.
It has the smallest windows I have ever seen on a train and from the inside it looks as if someone has taken a sheet of plywood and covered the top half of the windows to stop light getting in.
There are also wide plywood panels between each windows to cut out more light. The ceiling and the plywood is painted dark brown and there are lights that are switched on constantly even though it was sunny outside.
There are two picture windows at the very end and we were very fortunate that for the first part of the journey we sat by them, but once the train filled up we had to sit at the back.
The train set off at 11am instead of 9.45am and we arrived at Ella just before 10pm rather than the advertised 6.30.
The final joke is that all of the seats face backwards so you only see where you have been and the carriage is really bouncy, both up and down and side to side so at times it feels as if you are being dragged backwards really quickly on a spacehopper.
To get a good view you had to kneel on the seat and stick your head out of the window. Daz then went and stood half in and half out of the open door taking photos. I could hardly bear to watch and really expected him to topple off.
Despite all of this we had a lovely day and the views of the tea plantations were spectacular.
Will just get an ordinary train next time though.