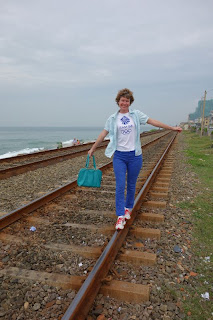 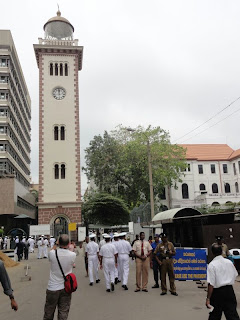 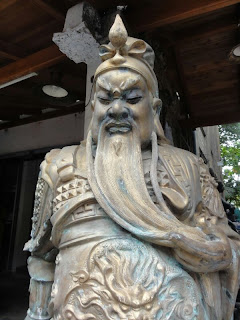 To be fair, no one ever said Colombo was a pretty city, and it is only recently that the civil war ended.
The nicest review I could find was that it had none of the charm, but worse traffic than Bangkok. Bearing in mind that last time we visited Bangkok we got stuck in traffic for so long that we had to abandon our taxi and run along the street with all of our luggage, then it didn't bode well.
Had a nice day exploring but it also has none of the beautiful attractions of Bangkok, and my photo selection is therefore very limited.
Followed the train line from our hotel to the fort area and managed to find the original lighthouse that was built in 1856. It is totally surrounded by much taller buildings now so can't be seen from the sea.
There were hundreds of sailors and soldiers around it, many with guns. We took a couple of photos and then read the inscription at the base of it which said it was a restricted military area and no photos allowed. Oops.
Finally visited Gangaramaya Buddhist Temple which was a crazy mix of statues and artifacts. It was colourful and interesting. There were no notices explaining anything so I can't tell you anything about it. Pretty scary statue though .
Ps, and Susan and Paul - I have no idea what you are going to do here when you visit in March!