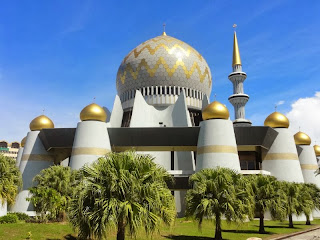 The weather forecast for today was even more certain than yesterday that it was going to rain all day. Imagine my increased surprise to open the curtains and find the sun shining again.
We decided to take a shuttle bus to a distant shopping centre to escape the forthcoming downpour.
By 1pm it was still bright so we returned the way we arrived. We passed the enormous KK City Mosque which can hold up to 12,000 people. We drove past it on a six lane highway and from about half a mile away cars were double and triple parked, some appeared to be almost abandoned at right angles to the road.
The nearer we got to the entrance the more cars were parked. Eventually the was only a narrow gap left on the inside lane on both sides of the road.
Right near the entrance to the Mosque the road was completely blocked and we waited in a traffic jam and watched thousands of men leaving the Mosque and heading for the parked cars.
Very quickly the road started to clear and then we were on our way again.
Yesterday afternoon we walked past the Sabah State Mosque, pic 2, which was also very beautiful, but not as large as it only holds 5,000 worshippers.
Frustratingly, it didn't rain at all yesterday and it hasn't started yet today, even though it is nearly 10pm.