Leech attack - a day of dramas 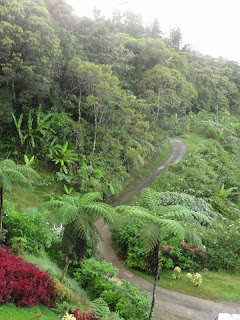 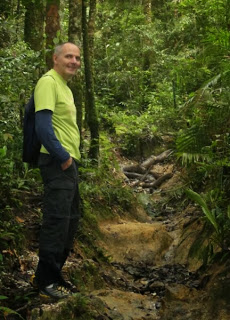 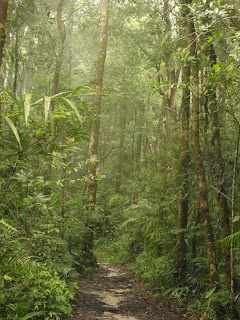 We started the day walking back down the track to the main road, accompanied by another guest, who stranded his hire car in a ditch in the rain last night and had had to have it towed out.
Suddenly I stepped on a large leaf that slipped under me and I slammed sideways onto the concrete road.  My shoulder and elbow took the brunt of the fall, and I felt very light headed, but after a little sit down we continued with our trip.
We decided to walk a trail in the National Park and set off up a dark and muddy track. We had been walking for a while and were bemoaning the fact that we never see any birds on our walks. Sitting silently around the next corner was the first other person we saw on the trail, a friendly, young Canadian ornithologist.
She pointed out some birds to us, including the Bornean Treepie, which is endemic to Borneo. She leant us her binoculars to get a better look, and it was a really great chance encounter.
After leaving her the track got wetter and trickier with very high tree roots and puddles to negotiate.
On one particularly difficult bit, Darren's trouser leg rolled up a little and I noticed that he had two leeches attached just above his ankle. He tapped them but they were latched on, and he told me not to lift my trouser legs in case I had any too.
He was calm, I was panicked and everywhere was so wet and dark we couldn't stand still to try to remove them. We set off to try to get to a road and I was practically running while Daz was being slightly more careful.
Eventually we got to the road and I was sooooo relieved to not find any on me.
I had to kneel on the floor when Darren lifted his trouser leg as I thought I might faint. Fortunately, one had gone but the other was still there and only about an inch long. As we were racing to the road I was thinking that there might be two enormous monsters, so it was a huge relief.
I sprayed it with insect repellent (which is probably not a great plan) but it fell off immediately, although Darren's leg started bleeding.
Ps, he is fine now and I am a bit put out that his drama trumped mine.